Kin Euphorics "High Rhode" Drink Review: Will It Make You Mellow and Happy, or Will It Just Taste Crappy? 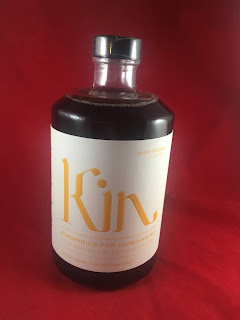 I got a lot of online ads for this funky new non-alcoholic beverage, or rather line of beverages, called "Kin Euphorics."  Since I'm always noodling about for a new product to review, I said "what the hey" and ordered not only "High Rhode," but also "Dream Light."

First, it does come in nice packaging...a bright yellow box. There was even a free little wrapped gift, which I'll show in the "Dream Light" review. 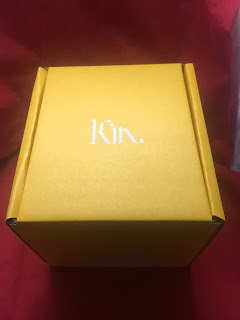 The beverage says on the front of the bottle, "Lifted Mind, Relaxed Body, Kindred Spirit."

I liked the light taste, which is not very sweet but more on the dry side, but I mixed it with a non-flavored plain seltzer water.  If you wanted something sweeter, you could mix it with tonic water or diet tonic water, say.

I did the suggested 2 oz. serving size, and added enough seltzer to make a drink of about 5 oz.

I felt a little bit mellower after about 15 - 20 minutes.

I put the suggested serving size, 2 oz., in a glass with ice and added some seltzer water. I personally liked the taste of this purple-colored beverage, but if you don't like bitter tastes, you may want to mix it with something like a sour mix or something sweet.

One of the ingredients is "bitter orange extract." so it's not surprising it had a slightly bitter taste,  Another ingredient is orange peel extract, which should add something nice and fresh to the flavor; and also GABA (Gama-Aminobutyric Acid).

So, how else did I feel while drinking it?  I felt pleasant, and I don't know if it was a placebo effect or not, but as I said, I felt a little mellower.  However, I would not say it has anywhere near the mellowing effect on me as a glass of wine.

I did also feel a mild tingling in the left side of my brain...however, I cannot say you will feel the same thing. It should be noted that I take a couple of medications; I don't know if this is something that would affect the, well, effect. (Maybe I'll go into my medications in my next review, of the sleepy Kin beverage, or "may delete later," as they say on the interwebs). ;)

Again, I would like to try this drink with other people, as well, to see if it affects me differently; if socializing has any effect.

All in all, it has a pleasant taste, in my humble opinion, though again if you don't like bitter, you may want to add mixers accordingly.

I am giving it a four out of five stars review. After I consume it with friends, I'll do a separate review and average the two numbers. ;)

I will add that the cost is a wee steep: it cost me $33.15 (marked down from $39 on the invoice) with free shipping. That's for a bottle of about 10 oz.  The gift with purchase, which I see now on the statement, is actually "edible glitter" -- hmmm...that may be a whole blog post in itself -- is also free.

So, there you have it...if you're curious about an alcohol-free alternative and it won't break your budget, I'd check it out.

Posted by Julia Wilkinson at 10:54 AM