When Beautiful People Kill Themselves: Supermodel Stella Tenant's Suicide and Vogue Magazine's Tribute to Her

When Beautiful People Kill Themselves: Supermodel Stella Tenant's Suicide and Vogue Magazine's Tribute to Her 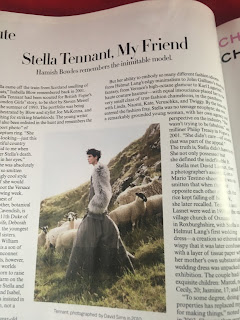 Suicide. If it isn’t one of the infamous seven dirty words, it sure seems like it is. It’s often absent from obituaries, conversations, people’s everyday chatter.
When I was leafing through my brand new copy of Vogue magazine, my gaze paused at a full-page “Tribute,” with a  photo of a beautiful tall woman in a fur coat and tweed skirt, and I saw it was to the supermodel Stella Tennant.  I had no idea Tennant had died.
I remembered Tennant from earlier years - the 90s, the early aughts, or thereabouts - an impossibly statuesque, thin, and beautiful model with sky-high cheekbones to die for and a sassy short brown haircut.
What I didn’t know was that Tennant had, just last December 2020, sadly, killed herself. Committed suicide. Etc. (One school of thought doesn’t like the word “committed” because it implies a crime).
As I read Hamish Bowles’s tender and anecdote-filled tribute to her, I learned she was actually real British nobility: she was the granddaughter of the 11th Duke of Devonshire and his wife, Deborah the Duchess of Devonshire (could a more alliterative and aristocratic name exist?).
Tennant may have been born into a lofty noble bloodline, but she was down to earth. Eventually she moved to a house in the Scottish Lowlands, according to Bowles, not far from the sheep farm where Stella had grown up — her parents, the second Baron Glenconner and Lady Emma Cavendish, the Duchess of D’s daughter, had eschewed London society for quiet farm life.
So what would make someone so beautiful, famous, presumably financially secure, with four beautiful children, want to end their life?
Well, this is the age-old question many people are left with. But if you read more closely, as I did, scouring the web for details, you can learn more about why. Tennant had apparently struggled with mental health issues for years, as have I. I cannot say what anyone else’s experience is, but depression is not for the faint of heart.  It can be a living, breathing Hell; a catwalk in Dante’s Inferno where you must kept strutting, exhausted, all day and night, with no end in sight.
She also apparently worried that, having turned 50, she was going to be considered too old to model. On top of that, she had recently gone through a divorce. Those things are stressful enough. Being isolated on an farm may not have helped. Ultimately only that person knows.
But, the point I’d like to make here is, I think we should, as a society, be able to say “suicide” is a cause of death just like cancer, heart attack, a car crash, or any other disease or misfortune. So often, it's simply not listed. No cause of death is listed.  That's the clue.
And really, often with suicide, it’s the depression that kills. The person who takes their own life simply cannot take it anymore. They died from a disease called depression.
Unless you’ve lived it, I say, judge not. Tennant’s family did disclose her cause of death, but asked for privacy. That I can understand.
I’m probably not helping the latter cause, but I think the bigger cause is that society should not cringe and whisper the word “suicide,” but speak it out loud without shame,  so it can see the light — and maybe with seeing the light, it will get more attention and treatment than it has in the past.
Bowles’s tribute also focused on Tennant’s remarkable life, not her death. “Initially, Stella, a 23-year old art student when the “London Girls” shoot took place...” —  [where she was “discovered”] — “...was wary of fashion,” he wrote.
“I thought it was a big, shallow world, and I wasn’t sure if I really liked the look of it,” she had said.
She did of course go on to have a great modeling career.
But, “she didn’t care — of course, that was part of the appeal,” milliner Philip Treacy had said, according to Bowles.
“The truth is,” wrote Bowles, “Stella didn’t have to try: she not only possessed but she defined the indefinable It.”
So there you have it. People of all walks of life kill themselves if they’re in enough pain. The “It” girl. Anthony Bourdain, Kate Spade, Robin Williams, that kid you saw around your neighborhood; somebody’s cousin/uncle/daughter.
Maybe if we hear more about it, it will be treated more like the public health crisis it is.
Posted by Julia Wilkinson at 2:07 PM