It's time to share another flip from my Flips contest in the Yard Salers newsletter at www.yardsalers.net:

I so enjoy your blog on "flipping" on Ebay! I want to tell you about one of my best flips.

I stopped by a garage sale and picked up 2 ceramic tiki-style glasses with hula dancers on them. One of them had the paint rubbed off a little. The seller told me they cost a quarter apiece and had come from a restaurant in New York.

I bought them and went home to do research. I stumbled across a great site of tiki mug collectors (www.ooga-mooga.com) who advised me about the mugs. I listed them together on Ebay since one had damage and was pleasantly surprised when they got tremendous bidding action and sold for $278!! Now I always look for Hawaiiana and tiki items. I have even sold some on the Ooga-Mooga website and avoided the Ebay fees.

(Attached is a pic of the mugs)

Keep up the good work and feel free to check out my Ebay/garage sale blog!!

Super find! I love tiki stuff..someone said something about it a while back but I never wrote much about them, so I am especially glad to have your flip story. Thanks so much! What cute mugs. I wonder if that restaurant went out of business and that's why they were so valuable?

Thx for the ooga mooga site too. And readers should love your blog..you have some great finds..I see you've dabbled in Britains, too..lol.

Thx again and best of luck in the contest!

I asked Amy if I could user her blog address and she said yes. And about the restaurant: "The Hawaii Kai was a NY restaurant/bar that went out of business. Here's what I found out: The Hawaii Kai is a legendary tiki bar from New York, best known as the location of Joe Pesci�s famous 'Do I amuse you' scene in Goodfellas.

Posted by Julia Wilkinson at 1:52 AM 2 comments: Links to this post

Email ThisBlogThis!Share to TwitterShare to FacebookShare to Pinterest
Labels: eBay

Here's a fun story from my last Flip contest on www.Yardsalers.net:

Hi Julia, I thought I would share my favorite flip with you. I was shopping at a thrift store and noticed a plastic bag on a shelf with something furry inside of it. My curiosity got me and I picked up the bag to see what it was. I noticed that it was a teddy bear and recognized that he was made from mohair.

I bought the bear for $2. When I got home and took him out of the bag, I saw that he was in horrible condition. His mohair was dirty and it was thinned out in places. His felt paw pads were all moth eaten so his straw stuffing was sticking out of them. He had a music box inside and a mechanism of some sort. Both were broken.

There were no markings on the bear, so I searched online to identify what kind of bear this was. I found out that he was a Schuco bear from the 50's.

I decided to list him on eBay in the same condition as I had found him. I started the auction at $19.99 because I did not think anyone would want him in such poor shape.

A few days later the auction ended and the bear sold for $215 to a man in Germany. I was shocked at how much he went for.

I have been hoping to find another mohair bear because I had so much fun researching that one and learning about him. Of course the thrill of the auction was a lot of fun too. It makes me think twice now about passing on something because of its condition.

Thanks for all the great info!

I have a good friend in Holland named Karin. :)

What a fun flip! Wow..I have heard of Steiff and other bears doing well, but not this Schuco brand. I guess people are willing to overlook condition when they have nostalgia for something or otherwise really want something!

Thanks again, so much, for the great flip..it will be in the next contest! :)

[Karin wrote back after our exchange and said:

"I had always read about Steiff also and had never heard of Schuco. I learned that they were pretty popular mechanical type bears. There is a mechanism inside so that you can move their tail and the head would move. There is one on eBay right now that is identical to the one I found, only he is in excellent condition. The auction # is 110453201344. You can see the huge difference in condition. I am curious to see what that one ends at."]

Posted by Julia Wilkinson at 9:59 PM No comments: Links to this post

Just in time for the holidays comes this heartwarming tale of Christmas cheer..and unexpected cash:

While helping a friend clean out her parent�s house, I came across several old 1950�s Dodge dealership Christmas cards that they were throwing out. I was trading my labor for items I thought were interesting, so pulled these, along with several other items out of the "going away pile."

Two of the cards were in fairly good condition; the other five were in rough condition. I listed the two goods one separately and the five others in a lot. The total of the three auctions came to over $100.00.

In total, from my two days labor at the estate, I have probably netted close to $1000.00. I am still listing items from the estate when time permits. However, my point is, always look at what is being trashed; I have found many treasures in these piles. And don�t forget "roadside shopping"!

Sorry for the delay! We've been hit by the flu here. :(

Oh yeah, I've probably been mistaken for a homeless person before, rooting around in "trash" that is set out in front of a sale or on a curb. LOL!

Dodge dealership '50s era Xmas cards..how fun! I bet it some some Dodge aficionados who snapped them up.

[I also dug up the following example of a Dodge Christmas card on eBay:] 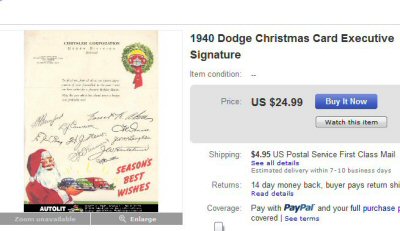 And you are so right..things being thrown out or put in the trash can sometimes be the best finds! Thank you so much for sharing your find, and you are entered into the next contest!

[This flip is excerpted from the December issue of Yard Salers newsletter..subscribe at yardsalers.net.]

Buy the book of flips! http://www.bigbucksflips.com/

Posted by Julia Wilkinson at 7:20 AM No comments: Links to this post