I'm a bit of a sucker for those Facebook ads.  You know the ones you get that seem to know what exactly you feel you cannot live without? (Like they've been peeking into your life, which heck, "they" probably are, anyway)?

Anyhow, one came at me from a company called PulseTV right in the most horrible, humid, sweat-pouring-inducing phase of Washington's famous hot swampy summers.

They were pitching a product that was a portable air conditioner.  Just pick it up from room to room, wherever you need, and it will provide air-conditioning magic and save tons on your electric bill!

Here's a partial screen shot of what the company emailed me soon after I ordered it: 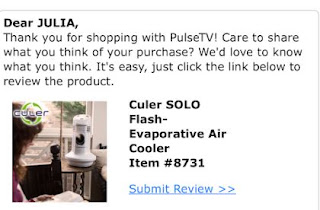 It worked in a special way that was -- well they made it seem somehow revolutionary. I can't remember now, however, how they said it it worked exactly.

So I ordered one. Shortly thereafter a tall box arrived on our doorstep, of which I took pictures I cannot now find.

But here's a photo of it set up and doing its thing in my office: 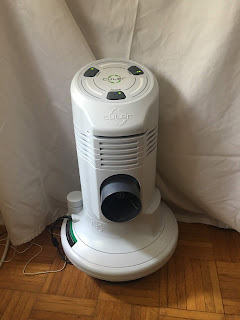 In any event, to my pleasant surprise, there was no assembly.  I just lifted up the tall-ish white thing out of the box, took out the paper directions, and read them.

OK, so this wasn't going to be too bad....I was to unscrew the little knob and pour in almost a gallon of water. Screw the cap back on, plug it in, and turn on "Power."  There are also two buttons, "Cool" and "Dan," (wait -- not "Dan," but "Fan," -- but I suppose it would be funny to have a button with a boy's name on it) which I turned on as well, wondering why anyone would not, since the thing doesn't really work well without all three buttons pushed on.

I like it.  It's not the Second Coming of Jesus, but it does make me feel cooler.  However, I need to be only about three to four away from its nozzle to feel this cooling effect.

How does it work?

Near as this non-engineer can tell, it vaporizes the water you pour in, spewing it out in a blast of air containing tiny water molecules.  You will not necessarily see any mist coming out, though I did once.

Once the light mist gets on your skin, it cools you down by evaporating from it.  And the breeze from the fan has a slight cooling effect.

So, I do recommend the Portable Culer, but I feel it will really only work well for a single (as in individual) person.

Posted by Julia Wilkinson at 1:00 PM No comments: Links to this post

Makeup So Good It Practically Jumps on Your Face

I haven’t written many reviews here but I’m going to start.
I recently purchased a new eyeshadow palette, by a new company I hadn’t heard of before, called “Too Faced.” I thought the double-entendre was cute, and the reviews were good.
So here’s mine.
I love this luscious little palette. One of the things I love so much is it smells divine, like coconut. But the colors are the right blend, too.
It’s a great “nude” palette (don’t get all excited; nude is not the same thing as Naked; especially since there’s another product by that name).

The product itself has a nice, smooth feel, with curved plastic and the writing in gold. There’s a little heart closure, like a purse.
And the colors! “The big three” of mine - a tawny beige/brown - “strip poker”; a rosy beige blending color, and a very light beige to brighten.
Then there are six different shades of light brown to chocolate for the contrast and the lids and creases.

I like the mirror that is on the top part when it opens, too. Methinks all it needs is a brush. Fortunately I haveone, from my old Naked palette. So that’s my only suggestion. Very happy with this little coconut concoction of color.
Posted by Julia Wilkinson at 4:18 PM No comments: Links to this post

Is eBay's Add Answer to User's Question to Listing Feature Going Bye-Bye...in Favor of Something Else?

For quite a while now --- I would say several months -- I've been having a problem when an eBay user uses the Ask Seller a Question feature. There was before an option to, once you had answered the question, sometimes at great length, add the question and answer to your listing, so other potential buyers could see the question and answer, and maybe not have to ask the same question again (and again).

This was something, as I remember, as simple as a checkbox that gave you the option to "Add Answer to Listing." Maybe not that wording but something like that.

For months, after I would get questions, and type out answers, sometimes at great length; I would check that checkbox but then afterward the question and answer exchange did not show up like it was supposed to.

Now, I must admit, sometimes I felt I was the only one bothered by this, and maybe I still am.

But when I asked in the eBay for Business Facbook group about it, something strange went down.  eBay said they would look into it, and the seller support person was very helpful imo, and did go to the technical team about it. But after some delay, the answer I got was odd...it didn't seem to answer the question of whether eBay was going to fix that feature or not...in fact, to me it seemed to imply that eBay was going to do something totally different to facilitate a question-and-answer exchange between buyer and sellers.

"We heard back from the technical team and it looks like that option has been deactivated. They are working to find another way for sellers to share information but the current format isn't intentionally shut down for now. I do apologize for the delay on that."

---
"Hi Xxxxxx, not to worry at all.  But I don't understand eBay's intent on this...don't they want a way for sellers and buyers to converse?  This is a key feature on Etsy, Poshmark, etc...I don't get it?

"So is it they will be introducing something new, but can't say what it is yet? Or something else?  It would be really nice to just have the system add my answer to any user's question so I don't have to tediously type it out as an addition to the listing. Well, thanks again for your help! I know you may not be able to say, and are just doing your job.   Thanks, Julia"
----

Sometime later, I heard from a different customer service rep:

"We definitely still want buyers and sellers to converse.  Unfortunately, I don't have further info on if there will be an update or not to this. Your best option at this point is to add any updated info from conversations with buyers to the listing. Thanks so much for your understanding!  ~Xxxxxxxxx"

Hmmm....well now what does that mean? I'm going to go out on a limb and predict eBay may be rolling out a new seller-and-buyer or seller-and-potential-buyer communications system.

What do you think it is? Did you use this feature much, and do you care that there's been a problem with it? Post a comment here!

Posted by Julia Wilkinson at 11:32 AM No comments: Links to this post

The Driving Chronicles: In Which Both Lanes are Blocked by Big Trucks

This is the first of what I hope is a series of pieces about driving in the Washington, D.C. Metro area.  I got the idea to do this because it seems every morning or evening when I am commuting, something weird/annoying/unnecessary happens.   And maybe occasionally a good thing.

Anyhow, the latest was this morning. I was getting off to the left two lanes on 495 West, to split off onto 95 South.  In these two lanes, ahead of me in my lane was a white car with its hazards on; I'm not sure why but good for them for putting their hazards on rather than not; a yellow county truck that said something about pre-snow treatment; and another yellow county truck in the the left lane next to me that said "Keep Back 100 Feet."

Now, I get that we need to have county trucks out and about, especially if there's a storm coming (I don't think so, but I better check the weather).  But do they have to be in *both* lanes, so no one can pass them? Can't they stay single file on the right lane?

As it was I simply went slowly behind all three of these guys until I could break out and get into the other lanes when we merged onto I-95.

But is it too much to ask that people, especially people in big heavy vehicles, don't stay in the right lane?  In Germany, they use the left lane only for passing. I think we need to adopt that rule here in the DC area.

Posted by Julia Wilkinson at 9:31 AM No comments: Links to this post

Dear eBay: Please post Sellers' Answers to Users' Questions Under the Listing Like You Say You Will

Several times now, I have gotten a question from a potential buyer, and when I go to answer it, I check the box that indicates I want the answer posted under my listing so other potential buyers can see it as well.

But, the problem is, it hasn't been showing up. Another seller confirmed this is happening to her, too.

eBay, what up with that, and can you please fix it?  I'll try to post a screen capture of what it looks like next time.

eBay sellers, has this happened to any of you?
Posted by Julia Wilkinson at 12:07 PM No comments: Links to this post

How to Find All Your eBay Fees

Are you wondering what your eBay fees are -- all of them? Listing, Buy It Now, Final Value Fee, Final Value fee on shipping, etc.?

EBay doesn't make it easy to find these fees, probably because it doesn't want to remind you what you're spending.

But if you find eBay's directions vague or outdated, here are step-by-step directions:

You should see a list of all recent fees and credits.
Posted by Julia Wilkinson at 1:44 PM No comments: Links to this post